Smart AudioBook Player is designed specially for playing audio books. Assumed that you have audiobooks and already copied them to your phone.
First 30 days Full version. Later – Basic version.

+ Chromecast support.
+ Playback speed control.
+ Classification of books (new, started, finished).
+ Download cover from the Internet.
+ List of characters. You can manually create a list of characters to easier follow the story.
+ Automatic pause in case you fall asleep. To continue playback just shake your phone.

+ Application Widget. Allows you to control the player from the home screen.
+ By specifying a root folder containing all your audiobook, you can exclude your folders which contains music and other audio files.
+ You don’t have to finish one book to start another. The progress is saved independently for all books.

To purchase (restore after reinstalling) full version press:
menu–Help–Version tab
Phone must be connected to the Internet.
Full version cost is $2.

Many thanks to people who left comments and suggestions.
If you have something that doesn’t work please write an email instead of leaving a comment. 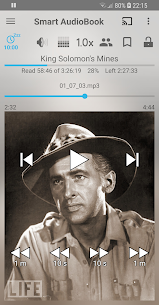 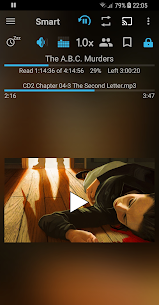 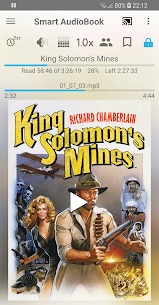